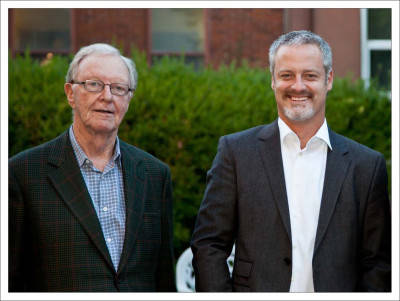 An interview with Donald and Rob Sobey

When we spoke with the founders of the D&R Sobey Atlantic Scholarship, a few things came out loud and clear. Above all was their immense pride in Atlantic Canadian youth, how strongly they felt about the Queen’s experience, and how valuable they consider exposure outside the region.

What is your fondest memory from your time at Queen’s?

Donald: Experiencing the world away from home. It was different in the 1950s and at the time there were only two students from Atlantic Canada in the entire university. The move to Ontario was an eye opener and getting to know people from all over Canada was really something.

Rob: Friends. I made friends with people from all over Canada and the world. Student life was amazing. In Kingston there are entire neighbourhoods of student houses, I don’t think there’s anything quite like it anywhere else in Canada.

What was your favourite course and why?

Donald: Economics. I had a great professor and the course was an interesting combination of history, geography and the economies of Europe and the underdeveloped world. I enjoyed Economics the most but I achieved my best marks in Accounting.

Rob: Marketing Strategy, but also Art History, which was an elective.

What can you tell us about campus life at Queen’s?

Rob: It’s vibrant, cohesive and inclusive. I always felt as though I was part of a community and not just a number.  Queen’s School spirit is renowned and there’s an overwhelming sense of pride shared by all students.

What is one piece of advice that you would offer a first-year student who is planning on leaving their home province to attend the Smith School Of Business at Queen’s University?

Donald: In my experience, the most important thing is to allocate your time. Treat university as though it were a job – eight hours in class, eight hours for sleeping and eight hours to enjoy the overall experience.  A month or so before exams I recommend cutting the enjoyment part down to four hours!

Rob:  The prestige of receiving a degree from Queen’s most definitively is earned by successfully managing a very demanding course load.  So my advice is stay focused on your studies.  But know that it is equally important to have balance.  Take time to make friends in your first year and enjoy everything campus life has to offer.

What can you tell us about Kingston, Ontario?

Rob: In addition to being a beautiful and historic university town, Kingston is located on Lake Ontario and offers some of the best fresh-water sailing in the world.  On the downtown front, there are many great restaurants and shops that offer a break from studies.

Why did you choose Queen’s University?

Donald: When I decided to go into business, a friend of my father’s who had attended the Royal Military College in Kingston suggested Queen’s as a great university with one of the best business schools in Canada. Then I was lucky enough to get an $1100 provincial scholarship, which covered tuition.  But overall, I wanted to leave the region for my education and a trusted friend recommended Queen’s.

Rob: Dad recommended it. I also wanted to study at a university outside of the Atlantic region and have the opportunity to meet new people and experience life away from home. Once I did my research I found that Queen’s University had an amazing reputation, not just in Canada, but around the world.

What would be your number one reason for recommending the Smith School of Business at Queens University today?

Rob: A combination of experience, quality and reputation. This extends beyond the school and learning environment to the quality of classmates.  I can’t emphasize enough how much the people you study with become an integral part of your educational experience.  Queens attracts some of the best aspiring business minds anywhere in the world.

What are you looking for in a successful D&R Sobey Atlantic Scholarship applicant?

Donald: In addition to academic excellence, we are looking for proven leadership skills, the ability to work with people and an overall willingness to get involved in the community.  Some of the most unique and moving stories come from those students who are committed to helping others.

What advice can you offer to someone applying for the scholarship?

Donald: Tell us what is most important to you to give us a real flavour for who you are.  And don’t forget this is a very competitive process.

Rob:  Tell your story and tell it well. Your story doesn’t have to just be about what you have done, it can also include what you want to do.  Drive home what is unique about you and put together a compelling package to sell yourself!

Are you both involved in the selection process?

Donald: Yes. A committee of eight comprising the D&R Sobey Atlantic Scholarship Board of Trustees as well as staff members from the Smith School of Business selects each year’s scholarship recipients.

What was the inspiration behind the scholarship?

Donald: I had such a great experience attending Queen’s and loved the idea of helping young people directly.  I believe when students have an opportunity to travel and study outside their home province or region that they graduate from university with perhaps a better experience of Canada.  I also believe that Atlantic Canadians have a very unique quality and I think Queen’s School of Business and the rest of the country can benefit from that.

The scholarship is unique to students from Atlantic Canada – what is your goal in awarding recipients from this region?

Rob: There are no strings attached. Of course, we hope that the scholarship recipients will consider returning to the Atlantic Region someday, but this isn’t a requirement.  Ultimately, we want these high achievers to make their mark nationally and internationally as Atlantic Canadians.

What have you learned from the D&R Sobey Atlantic Scholarship recipients to date?

Donald: Whenever I meet the scholarship recipients, I feel an incredible sense of pride. It leaves me assured that Canada has great leadership ahead.

Rob: They are among the best young people I have ever met. They are smart, ambitious, with great personalities and know how to have fun. I can tell you one thing, if Dad and I applied for the scholarship today, I’m afraid we wouldn’t win!

Donald joined his father, Frank H. Sobey, and brothers Bill and David in the family business in 1958. He was appointed to the board of Empire Company Limited in 1963, became President in 1969 and took on the role of Chairman in 1985 until his retirement in 2004.

A business leader and arts philanthropist, Donald served on numerous boards and foundations. He was a member of the Canadian Group of The Trilateral Commission and the Advisory Board of Queen’s School of Business. Donald was also a past Board Chair of Maritime Tel & Tel and the National Gallery of Canada, and a past Director of the World Wildlife Fund.

In 2003, Donald received the Keith Kelly Award for Cultural Leadership by the Canadian Conference of the Arts. In 2007, Donald and his brother, David F. Sobey, were both inducted into The Canadian Business Hall of Fame.

A fourth generation family business member, Rob worked at Sobeys Inc. for 33 years, holding increasingly senior management positions before serving the last eight years as President and CEO of the Lawtons Drugs division.  He retired from executive management in 2014 to focus his efforts on philanthropy and governance.  He serves on a variety of boards: public widely-held, public family-controlled, private family-controlled, private equity, and not-for-profit.  Rob currently sits on the corporate boards of Empire Company, SeaFort Capital, DHX Media Limited, Norvista Capital, and Stanfield’s Limited and chairs the HRCC Committee of DHX Media.

Rob volunteers in the education, arts, and military sectors.  He has served on the boards of Queen’s University, Dalhousie University, NSCAD (Vice Chairman), and NSCC (Chairman).  His current efforts to help further the education of young Canadians have him involved in several scholarship programs.  He is Chair of the D&R Sobey Queens Scholarship Program for Atlantic Canadians attending Queens University Commerce and the Kings University D&R Sobey Liberal Arts Scholarship which attracts students from across Canada to Halifax.  Rob is Honourary Chair of Venture for Canada, Chair of the RG Sobey Community Leadership Award at NSCC, and sits on the Queen’s University School of Business Advisory Board.  He is a member of the WWF Atlantic Council and helps oversee the Sobey Fund for Ocean Studies at Dalhousie University.  With an aim to assist the understanding and importance of family-controlled businesses in Canada, Rob regularly lectures or presents for the ICD and CAFÉ on Family Business Governance.

Heavily active as a collector and promoter of Canadian art, Rob is past Chairman of the Art Gallery of Nova Scotia, and is currently Chairman of the Sobey Art Foundation and its annual Sobey Art Award, the preeminent prize for Canadian contemporary visual art.  He is an Honourary lifetime Governor of AGNS, a member of Britain’s Tate Museum’s American Patrons Committee, and is currently involved with the establishment of the Tate Canada Foundation with the goal of increasing the awareness and reputation of Canadian artists internationally.

Rob is entering his sixth year as Honourary Colonel of the 1st Field Artillery Regiment of Halifax (RCA).  In 2012 he received a Queen Elizabeth II Diamond Jubilee Medal for outstanding service to the military.

Selected Top CEO for Atlantic Canada in 2009 by Atlantic Business Magazine, in 2011 Rob was inducted into their Business Hall of Fame.  He has an honours undergrad from Queen’s University, an MBA from Babson College, and the ICD.D designation (2009).  Rob’s hobbies include motorsports, boating, travel, and music.  He has an interest in collecting specialized automobiles, one of which he races through his co-owned team RPM Racing.  Rob resides with his wife and two teenage children in Stellarton, Nova Scotia.